Okay, I guess I have to go here... Basically, you need to learn to become proficient with your sword. Never rely on bombs and arrows to make up for lack of skill. I used to never use bombs nor arrows at all until they started dropping when people die. Now my main strategy is to steal and waste them so others can't use them. Don't ever start your PKing full on bombs and arrows; go waste them and start your PKing on empty.

Bombs are handy to use as projectiles to knock people out of the way in tight spaces or stairs. Other than that, I tend to waste them all at .5 before I die, so they don't drop for other people to use.

Arrows are handy for getting your run-away .5 kills. Also good to shoot them parallel to a fort's flag to stop people from attacking or healing a fort flag. If I end up stealing more than 20 arrows, I'll probably waste most of them outside. It's good to keep exactly 4 bombs and 4 arrows, that way you can't possibly drop any. 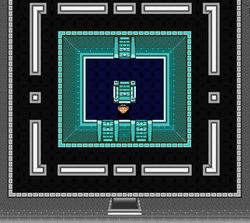 If you're PKing in a fort or tower, many of them have tight spaces... Sardon's hallway, MoD's center, Swamptown's downstairs, most areas in Deadwood. Any place that is only 4 tiles wide (2 player-widths) can be blocked by one person.

A lot of the time, losing a lot of health is inevitable. It is very difficult to get around to your enemy's side or back, so it's mostly face-to-face sword spam.  With your first hit, slide towards a wall (but still facing forward) and make your hit quickly. Hopefully this knocks your opponent to the side so you are able to get around him. Just never stay next to the wall too long, or then your opponent is able to get around too, so stay in the middle.

Sometimes if you or your opponent is even just a tiny bit laggy, it is possible to walk through him, making it easy to turn around and hit from behind, walk back through and keep alternating.  But let's say you aren't able to walk through your blocker because he is sword spamming. Make your hit and either try to push forward or run back. Sometimes if one of you is laggy, you might be able to make a quick step in, hit, and step back without getting hit at all.

You also want to make use of your blink, which I will talk about later. The worst thing that could happen in a tight space is you get stuck and are forced into a sword spamming lock.

Make Use of Your Surroundings. 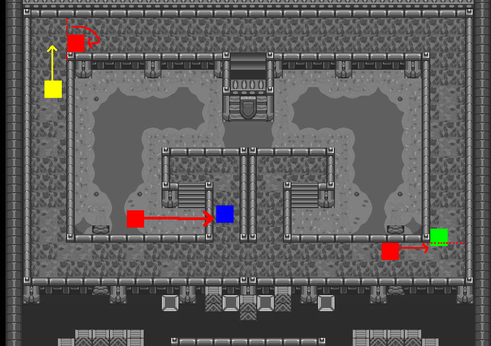 This isn't 1v1 spar, so levels of course have much more variety than a featureless box.

So make use of the features of your surroundings. Such as corners and thin walls.

You can also sword spam around a corner, as long as you don't make green's mistake. If someone is chasing you (yellow) and there's corner nearby, then run around the corner, turn around and swing your sword just before yellow makes it to the corner. Just make sure your whole player is behind the edge (red dotted line).

You can also make use of thin dividing walls in the Swamptown and Sardon's Towers and fences around the overworld. If someone is blocking your path (blue), then it's real easy to just run up and hit him through the rail. Just be careful because he can do the same. Arrows can also go through these rails and fences if he isn't close enough to hit.

Oh, and I guess I'll put this here. Remember to swing your sword once as you go through a door. 'Cuz you never know if there's a thug spammin' on the other side.

Lag is inevitable. Whether it be constant, or spiking, moderate, or ridiculous. We'll get into more of the technicalities later.

If your opponent's lag is high but stable (lags bad, but you can see him okay; no warping), it is just about useless to chase him and try hitting from behind, because really, he's no longer there. You have to predict where he is going and sword spam in his face. Predicting your opponent's movements is vital in every situation anyway.

If your opponent's lag spikes a lot (warps around, non-continuous movement), the best thing to do is make a ton of random sword swings all around the area and try to get out of the way before his router catches up. Don't stay in the middle; stay near a wall. All of the sword swings that you made while the lagger was frozen will happen on his screen all at the same time when he reconnects. However, any sword swings that the lagger made when he was frozen on your screen will also happen all at the same time when he reconnects. So stay out of the path you predict he will take. 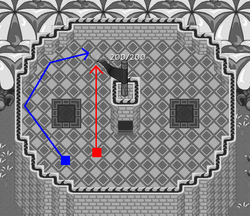 Runners are the ones that run, turn around for cheap hit, and keep running. The most important thing is, don't chase them! Don't draw yourself into traps. Besides, you shouldn't be focusing on one single person anyway. Just start hitting the other people around you. Just be careful because runners tend to come back when you are preoccupied with someone else.


<~ If a runner is trying to go around the outside walls (blue), it's much quicker for you to take the inside (red) and meet him at a more narrow area to make your hit. When dealing with runners, find a more direct route.

If a .5 is running away from you, try to get it with an arrow. Or wait for him to get stuck behind a crowd. Just be careful when you chase people. Don't let them hit you so easily. 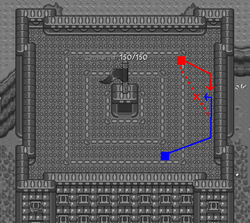 A lot of skilled sparrers like making cheap hits by "wall sparring" (sliding against a wall behind you and hitting perpendicular). Wall sparrers are tricky because you don't expect to get hit from the wall you are near. And sometimes you think you are near enough to the wall to block the path, but they are still able to slip past.

Wall spar is a good defensive technique, so learn how to do it for yourself too.

<~ But here's an easy way I use all the time to beat wall sparrers at their own game. Once wall sparrers slide against their wall, they almost always hit perpendicular (away) from the wall (blue). They expect you to take the red-dotted path, so they get behind you before you can get to the wall, and swing at the red 'X' (that place where they predicted you would go to). So, instead, you get to the wall quicker and make your hit parallel to the wall. (I used Swamptown Tower for this diagram because MoD's walls are all kinds of cattywampus).