It's astounding, the number of people who don't understand lag. People blame this entity called "lag" for all their problems relating to combat activities. People blame everyone but themselves for lag. I've seen people call others "hackers" when it's really just lag. I've seen people call others "laggers" for an issue that isn't really lag.  People think the "admins" can just flip a switch to "fix" lag. Yes, there is a such thing as server lag, but most of the time, it's just you.

*You will never see yourself lagging. On your screen, your movements will always look continuous. But lag is inevitable, so don't make yourself look stupid saying, "lol I don't lag." If everyone on your screen freezes at the same time for a second, your lag is spiking. Spiking lag is easy to self-detect, but it is almost impossible to tell if you have a high but stable latency.

Saying "showlag" once is not a good measure of your latency. To measure your lag, say "showlag" about 5-10 times. If  the numbers stay about the same, then your lag is fairly stable (but stable doesn't mean you don't lag. Your lag is still that number in milliseconds. "Stable" just means you constantly lag that much, but thats a good thing). If the numbers that return are scattered all over the place, then your lag is spiking, and on other people's screens, you are probably warping around a lot.

Oh, and if you do sense yourself moving slower than normal, that's not exactly lag. Frame rate is next on our list.

And don't complain about laggers, because no matter what, you lag too. Lag affects both parties equally. And honestly, the person lagging more is in a worse position than you. You see one laggy person, but the lagger sees everyone as being laggy.

If this isn't a good enough explanation, there's a certain sparrer on Graal that I know would love to lecture you about it if you asked.

Have you ever seen those noobs that run by slower than trying to pass a kidney stone? They're probably using an iPod 2G. Have you ever ran though Graal City and it just seems like you hit a wall of "lag" and you suddenly start running slower? That's not exactly lag, it's your frame rate, or FPS (frames per second). This is how fast your client is able to process the game's state of being. Older devices can be bogged down easily if you're in an area with a lot of people. Tons of people = tons and tons of images for your iPod to load. Graal's app on iPods and I think Androids will cache (save an image link) images on your device. But the PC flash client does not cache images, so images will take longer to load on PC.

This game mechanism is really useful and it's very important to learn how to use it to your advantage.

*After you are hit, you are thrown backwards, your player flashes, and you are given a few seconds of immunity. This is called "blink." It is important to maximize your blink time, so while blinking, you can stay where you are, or choose one direction to run. Do NOT stop running, do NOT turn or change directions, and do NOT swing your sword (unless you are able to make a hit). These things will end your blinking.

It is very important to take advantage of this short time of invincibility. If your assailant is trying to run away, charge forward and hit him in the back. If your attacker still wants to fight, then rush forward and at the last second, slip to one side and hit him from the side.  If he is still close to you, run in his direction until you are behind him and turn to make a quick hit. If you are being sword spammed, stand still for a second, then make a quick side step and turn for your hit.

"Laming" (standing still while blinking) is also one use of your blink time. But if you intend to hit your attacker back, you don't  want to use more than half of your blink time laming. If you are hit, you may want to stand still for a second to see what your attacker does before you decide your course of action. If you stand still and he stays there trying to sword spam you, some one else may come by and attack him, thus rescuing you in a way.

Laming is also useful when you are stuck and have nowhere to go anyway and someone is sword spamming you. Since your cock blocker is sword spamming, he is ruining his own blink, so you are able to hit him at any time. But the timing must be right for this. Swing your sword twice. But not too fast because you have to give him time to ruin his own blink after your first swing. So swing your sword twice with only a fraction of second between. If you get lucky and time your first hit right, you may be able to make two hits on the cock blocker while only taking one hit yourself. Otherwise, laming while be sword spammed is good anyway so someone else may come and hit him for you. 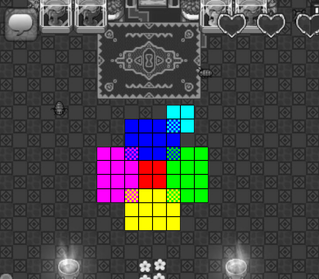 (This section added by request)

Your opponent's "hit box" is the area your sword has to make contact with to actually hit him. Players' hit boxes are a 2x2 tile square. Basically, the area your body takes up, excluding your head.

Your sword's range can reach 3 tiles away from you, and 1 tile off to either side. Therefore, each sword swing covers a total of a 3x4 (or 4x3) tile rectangle. I actually spent two hours measuring this exactly using two player accounts and a few fences. I even made sure this is the same for every direction.

You are the red player. For a hit to connect, your opponent's hit box must intersect with your sword's range. Basically, your opponent must be standing in the blue, green, yellow, or fuchsia areas (corresponding with up, right, down, or left sword swings, respectively). Notice how the tiles to each of your catty-corners have two colors. This means if someone is standing at your corner, you can hit him from either of the two directions! Also note, a hit will connect even if only a tiny bit of your opponent's hit box is inside your sword's range. So it is possible to hit people from a whole knight's jump away (cyan player). But beware. Imagine your enemy being the red player and use the same information defensively.

However, for a hit to connect, both same place and same time are equally important. Lag is a major factor here. Does it sometimes seem like you have to be really close to someone to hit them, even though it seems like they are able to hit you from way far away? This is because of lag. Hit detection is a client-side script. To explain this, let's say Player 1 is hitting Player 2. For the hit to happen, Player 2's iPod must detect that a sword is inside his hit box, regardless of what Player 1's iPod sees. Just because Player 1 sees his sword hit Player 2 doesn't mean anything. Player 2 may have lagged off somewhere else and he didn't see the sword swing at the same time you did.

This is why it is important not to chase laggers. It is almost impossible to hit them from behind. And it is easy for them to turn around an make a sword swing that you won't see until you have already walked into it. This is why you should sword spam in front of laggers. You still see them far away, but in reality, they are already much closer to you and won't see your sword spam until they have already walked into it. 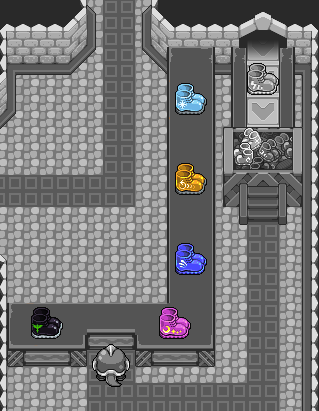 With the addition of Destiny, a new set of gani items were introduced that have different effects. These boots will have some affects on your gameplay. Some boots make PKing difficult, but it's really fun when you get used to it. The Splash Boots have no mechanical difference, so I will not include them.

Moon Boots: I have moon boots and they are really fun to PK with. These boots make you constantly bounce while walking. The distance between each bounce is 14 tiles, and you bounce 2 tiles high. It may seem like you are walking faster or slower depending on if you are jumping or falling, but you are really going at the same speed as always. It may also seem like your sword may reach longer upward if you are jumping, but that is not true either. I tested this, and it does not matter where your body is. Your hitbox and the start of your sword's range is anchored to your shadow (where you would be standing if you were not bouncing. It makes it more difficult for both you and your opponents because of the visual illusion.

Hover Boots: These are similar to the Moon Boots, but instead of constantly bouncing, you levitate at the same altitude. So really, there is not much affect on your gameplay.

Opposite Boots: These boots not only make you walk backwards, but it also moves you in the opposite direction as the arrow you pushed. Obviously, it will be difficult to reverse the directions in your mind.

Ice Boots: These are similar to walking on ice skates in Snowtown. After you stop moving, you move a little more if you hit another button. 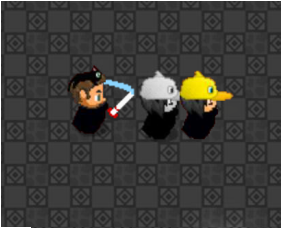 Ok, so let's put all this together. Oh, by the way, the young lad of the left is Smitty Werben Jagerman Jensen, our model and photographer for this site. For the reason of anonymity, we will call the person on the right "Duckcap."

In review, there are distinct differences between framerate and lag. And lag can either be fairly stable, or can spike all over the place. Sooo it would really suck to have a high, spiking latency with a slow framerate.

However, lag and framerate can affect other mechanics in the game. For example, the game has set a standard amount of time for which blinking lasts. However, this can be highly affected by framerate. Players with slower framerates may have a longer blink period. This is why it takes a lot longer to sword spam down an AFKer on an old iPod. This is why it is sometimes almost impossible to hit someone who is multitasking on a PC. If the PCer's browser tab for Graal is inactive, or if he has an email account (or other web-app that constantly refreshes) open on his browser, Graal's framerate can drop significantly. A player that is paused literally has 0 frames per second, and that is why you cannot kill pausers.