PKing with a guild or PKing alone is mostly just a preference. I recruit people who ask to join if they have minimal skill. But if you do PK with other guild members, don't bring a lot of people and then recruit everyone you see. More guild members means more people you aren't able to kill. It's also annoying when guild members get in your way, causing you to get hit.  So bring one or two buddies at most. 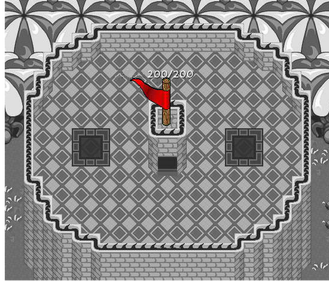 As a PKer, your main goal is to get kills, not attack the flag. But hitting the flag when no one is attacking you is part of the fun. It will distract the people defending the flag for one. But be careful; by hitting the flag, you are literally asking to become bait. So be prepared to go back into combat-mode.

Different forts' flags have different hit-boxes, so learn how far and what directions you can face to be able to hit the flag. If possible, you want to hit parallel to the flag, that way you can hit people at the same time. Or stand behind someone and kill them and spam the flag at the same time.

Cooperate with other PKers and guilds attacking the flag. If the the fort is easy to take and the flag is going down often, then stop killing attackers and focus on killing the defenders. But don't let the largest guild at the fort take the flag. Play "keep-away" from the largest guild to keep the flag unstable. Seriously, PKers can have strong influence over a fort and who takes the flag if they work together. Try to help noob guilds keep towers away from garbage guilds you don't like.

When the flag is going down, focus on killing the defenders, and let the attackers take care of the flag, and only spam the flag if it needs help going along. Try to die to refresh your health before the flag gets to 100 (only if at MoD). Now you need to try hard to stay alive. When the flag hits 50, start taking out a few people from the guild you are playing "keep away" from, but make sure you don't kill too many that the flag starts going back up. When the flag hits 20, this is your time to jump in and spam the flag and try to make the last hit.

Now the flag is your main priority. If you're alone, you ain't keeping it long, so you won't be disrupted from PKing long. If you have a few people in your guild, then you'll be able to keep longer. So focus on the flag. Hit flag hitters and the flag. Don't get distracted by chasing around PKers. Only kill PKers if they won't leave you alone. When you lose, remember, you aren't a trashy tower guild anyway, so it doesn't matter.

When your flag gets too low to save, start slaughtering the people in the large guilds your are playing "keep away" from. As a PKer, it is best to hand off your flag to another single random PKer.